The Corporation for Public Broadcasting: Federal Funding and Issues 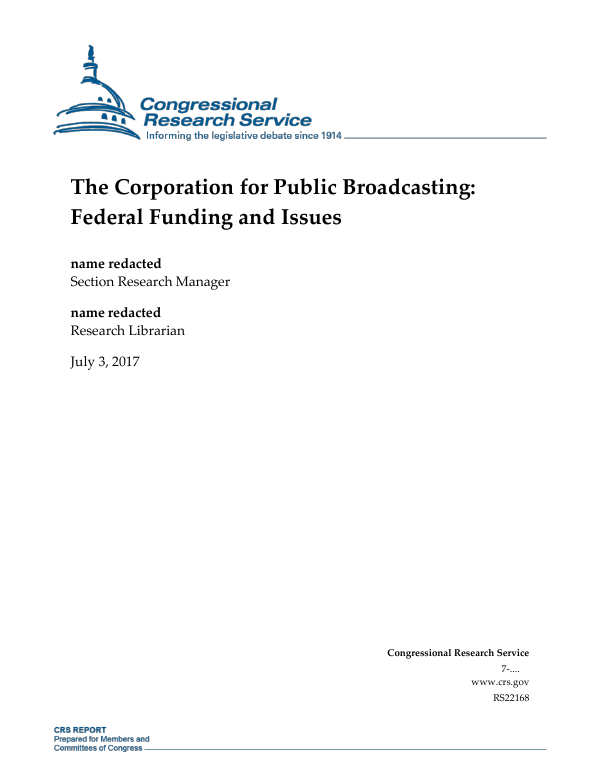 “Is there any justification for continuing to ask taxpayers to fund NPR and PBS?”

Timeline: The History of Public Broadcasting in the U.S.


World news in pictures Show all Protesters hold smoke grenades as they gather in central Kiev to demand broader autonomy for separatist territories, part of a plan to end a war with Russian-backed fighters. Anti-government protesters rush to an injured man during a demonstration in Baghdad, Iraq.

Footage of a hugely rare polka dot zebra has been captured in Kenya. The foal was photographed in the Maasai Mara National Reserve. A gust of wind lifts the cassock of Pope Francis during the weekly general audience at St. Peter's square in the Vatican. Protesters clash with an Iraqi riot police vehicle during a demonstration against state corruption and poor services in Baghdad. A student protester throws a burning stick at riot police officers during a clash in Jakarta, Indonesia.

An anti-government protester wearing a mask depicting U. The Duke of Sussex walks through a minefield in Dirico, Angola, during a visit to see the work of landmine clearance charity the Halo Trust, on day five of the royal tour of Africa. Residents of twelve towns including Rouen have been asked to stay at home after a fire broke out according to the prefect of Normandy.

Participants dressed in traditional attire pose for pictures during rehearsals for Garba, a folk dance, in preparations for the upcoming Navratri, a festival during which devotees worship the Hindu goddess Durga, in Ahmedabad, India. A protester fires at riot police during university students' protest outside the Indonesian Parliament in Jakarta.

An anti-government protester sets a fire during a rally outside the Mong Kok police station in Hong Kong. The All Blacks secured a victory over their rivals. Thousands of school students and protesters gather in The Domain ahead of a climate strike rally in Sydney. Millions of people around the world are taking part in protests demanding action on climate issues.

A pedestrian walks by an advertising installation for the Japan Rugby World Cup in Oita, on the eve of the start of the tournament. A moto-taxi driver takes two passengers past a burning barricade set up by people protesting fuel shortages in Port-au-Prince, Haiti. People paddle on a stand-up board during sunrise in a beach in Larnaca, Cyprus. Mugabe died in Singapore on September 6 at the age of He left Zimbabwe deeply divided over his legacy with his country still struggling with high inflation and shortages of goods after decades of crisis. Rescue workers on a boat rescue a person stranded inside a flooded tunnel after heavy floods in Pilar de la Horadada, Spain.

Police officers try to control the crowd after members of the public were invited to view Robert Mugabe's body as it lies in state at the Rufaro stadium in Harare, Zimbabwe. It is the 18th anniversary of the attacks. Local actors dressed as ancient warriors re-enact a scene from the 7th century battle of Kerbala during a ceremony marking Ashura in Iraq.

A firefighter assesses the fire spreading across land on Long Gully Road in the town of Drake, Australia. A number of homes have been destroyed by bushfires in New South Wales and Queensland. The hurricane hit the island chain as a category 5 storm and battered them for two days before moving north.

An artist performs on Tverskaya street during celebrations marking the nd anniversary of the city of Moscow. Children play football next to a defaced portrait of Former Zimbabwean President Robert Mugabe in Harare on the day he died, aged The former leader was forced to resign in , after a year rule, whose early promise was eroded by economic turmoil, disputed elections and human rights violations, has died.

Authorities work at the scene of a train crash in Yokohama, south of Tokyo. According to media reports, more than 30 people were injured after a train hit a track at a crossing. A police office removes burning tires from the road, as protesters set up fires to block traffic along Airport Road in Abuja, Nigeria. A riot police officer throws a teargas canister as looters make off with goods from a store in Germiston, east of Johannesburg, South Africa.

Police had earlier fired rubber bullets as they struggled to stop looters who targeted businesses as unrest broke out in several spots in and around the city. A boat off the island of Santa Cruz in California burns in the early hours of Monday morning. More than 30 people were on board the boat, which is thought to have been on a three-day diving trip. Flowers are laid in a hole in a wall as people gather in the gym of a school, the scene of the hostage crisis, in memory of victims on the fifteenth anniversary of the tragedy in Beslan, North Ossetia region, Russia.

More than people, including children, died as a result of the terrorist attack at the school. Yet despite the overwhelming trust people of all political stripes place in public media, lawmakers have long threatened to gut the Corporation for Public Broadcasting, which provides essential financial support to NPR and PBS stations across the country. Cutbacks and consolidation have decimated local news coverage — making community media outlets more important than ever.

Public-media stations have a historic opportunity to fund the kinds of media people need in New Jersey and beyond. We teamed up with allies to deliver , petition signatures pushing Congress to stop Trump from defunding public media. Share this. Public and community media have the potential to cover stories that mainstream outlets ignore and amplify the voices of those who have been excluded or misrepresented. Despite the modest nature of this investment, lawmakers continually threaten to defund the CPB.

If anything, the federal government should be spending more money per person to strengthen public media nationwide.